I could spend months simply reading John Feinstein sports books such is quantity of high quality books he has produced over his career. Perhaps more than any, A Season on the Brink, is the book most would point to as both Feinstein’s breakthrough and most enjoyable work. 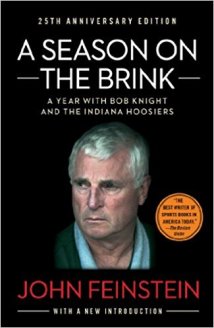 Feinstein followed the Indiana University basketball team through the entire 1985/86 season – the ups and the downs as the team sought to recover from a terrible performance the year before and regain their place at the top of NCAA rankings.

As Feinstein readily acknowledges, a large part of the brilliance of the book is due the intensely fascinating character of Bob Knight.   During the season covered, Knight had been at Indiana for 15 years, and would remain for another 15 more before his ignominious departure in 2000.

Reading this book now, knowing how Knight’s story in Indiana ends, puts on interesting context on Feinstein’s coverage of Knight’s bad behaviour.  In this context, the recent ESPN 30 for 30 documentary, the Last Days of Knight, is a great companion piece for this book – especially to see how the standards of behaviour expected from a winning coach have clearly changed since Knight’s glory days.

It is fascinating though how, far back in the mid-80’s, so many of Knight’s friends correctly predicted in comments to Feinstein that Knight’s reign would end badly because of his aggressive behaviour. Ultimately, details of physical abuse from ex players saw the Indiana leadership lose patience with Knight who ended up moving to the much lower profile Texas Tech and subsequently to ESPN’s basketball coverage.  Indeed, one of the players chronicled in the book, Todd Jadlow, has published his own book in recent years which includes specifics about the physical abuse he took from Knight – including getting punched in the back of the head with a closed fist.

Feinstein also captures the warm side of Knight – in particular his loyalty and his dedication to his friends.  It seems to me that Feinstein painted a very raw, but very honest portrait of a talented coach who constantly struggled with his temper and ego.

While Knight dominates the book, the players come across with a huge amount of credit, both for their talent and their ability to handle Knight’s abuse.  Steve Alford in particular is the leading man, who would achieve even more the following season by leading Indiana to Knight’s third national championship.

Make no mistake, this is a wonderful book.  Feinstein made the most of his incredible access to write a searing and insightful book that captures the highs and lows of high level amateur sport.  Its so well written that it grips you and is a page turning as any thriller. Feinstein has many great books but I don’t know if he has ever been able to top this genuine and deserved classic.