Uli Hesse is the great English language chronicler of German football history.  His book Tor!: The Story of German Football, a detailed and engrossing history of the game in Germany, is a regular on any list of the best European football books. His more recent books take a deep dive into particular clubs with Bayern: Creating a Global Superclub) examining the Bavarian super-power and now Building the Yellow Wall which tells the story of every football hipster’s favourite Bundesliga team, Borussia Dortmund.

In recent years, Dortmund have taken on a cult appeal with fans around the world – to such an extent that Ryanair put on match-day special flights from London to cater for the demand.  Hesse traces the history of the club from its humble origins in a Dortmund beerhall, through to it’s 1997 Champions League win and its more recent period of glory under the charismatic Jurgen Klopp.

The club’s origin story is quite interesting with the founding father’s risking their social standing by rejecting the Church’s insistence that football should not be played on Sundays. Throughout the book, Hesse tracks the key figures from each generation.  One remarkable feature is how often prominent fans ultimately end up being employed by the club, showing the close connection between the team and its’ city.

Hesse details the lowest moments of the club both its relegation to Bundesliga 2 and its near financial collapse in the 2000’s. As with many sports books, these moments of crisis and peril are often more interesting than the success.  Hesse brilliantly captures the tension felt by fans as they waited to hear whether creditors had approved a deal that would allow the club to survive.

The book is packed full of nuggets of history and trivia that you are unlikely to find anywhere.  Hesse grew up in Dortmund but also interviews a wide range of players, club officials and ordinary fans.

Hesse is an engaging writer who manages to find the right level of detail to tell the story while keeping readers engaged.   This book has less match report style recounts of long forgotten matches than his earlier book on Bayern and instead wisely focuses more on the cultural impact of Borussia for its fans, its city and football in general.

Overall, Building the Yellow Wall is a really enjoyable read for any football fan. 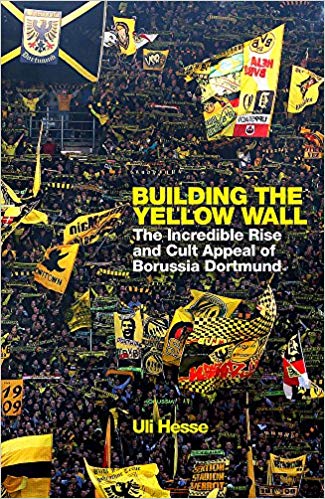