Christopher McDougall’s first book, Born to Run, became a huge bestseller and sent the barefoot running movement into the mainstream.  He used the story of the Tahamara runners to explain how humans were born to run (and run barefoot).

His second book ‘Natural Born Heroes’ used the story of Greek resistance fighters on Crete to explain how humans have vast unused athletic potential and to take a deeper look at the parkour movement.

McDougall beautifully tells the story of how, together with friends and family, he rehabilitated a neglected injured donkey. The narrative builds around a unique adventure race where participants team up donkeys to cross miles of difficult terrain.  It is an uplifting, inspiring and heart-warming tale of triumph over adversity.

It’s a beautiful story told exceptionally well.  McDougall sucks you in as your come to passionately care for this poor donkey and become invested in the outcome of the adventure race.  All the while, in his trademark style, McDougall uses Sherman’s story to explore a much deeper truth – how the relationship between animals and humans is fundamental to the human condition.  Animals make us happier, healthier, fitter, and all round better off.  The bond between Sherman and some of the team working with McDougall made a huge difference in improving their mental health and general well-being.

I’ve always found McDougall’s books incredibly inspiring.  While getting and caring for a rescue animal is beyond my capabilities sadly, I am going to be in Pennsylvania in September 2020 when the Bird-in-Hand half marathon that features at one point in the book is on so…. I’ve signed up for it as motivation – 7 months to build up to 13 miles!

Thanks for the inspiration Chris! 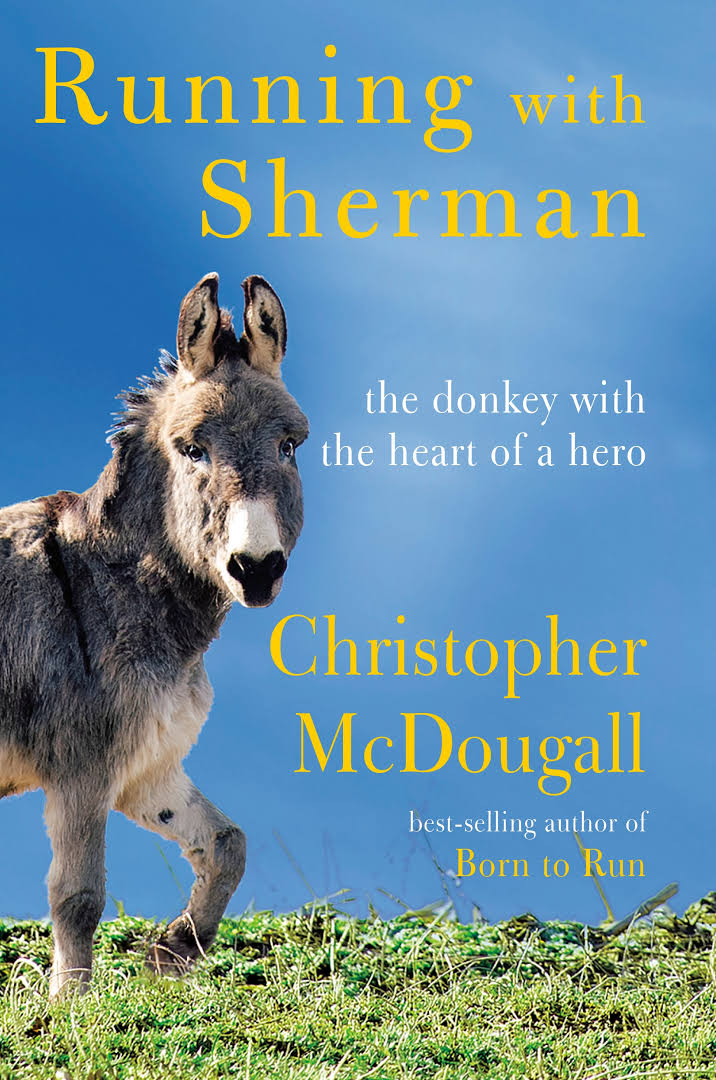 Born to Run was a huge hit when it was published in 2009.  Part manifesto, part love letter to running, the book is built around a secret race that the author took part in alongside the reclusive Tarahumara Native Mexican tribe and the legendary ultra-marathoner Scott Jurek.

McDougall becomes enthralled by stories of the Tarahumara who can run amazing distances without shoes and without injury.   McDougall intersperses the story of him tracking down and the secret race being organised with his own musings on how running has moved away from its original origins.

The book has gained most of its attention for its exploration of barefoot running and the (surprising) impact running shoes have had on injury rates.  Spoiler alert: as technology improves, injuries have gone up, not down.

McDougall also explores the hypothesis that gives the book its title – that humans have evolved as a running animal.  The theory goes that humans developed the ability to run long distances in order to literally run down prey.

The book is exceptionally readable and packed with a cast of fascinating entertaining characters.  McDougall’s passion and enthusiasm shines through.  He may not be the most neutral of narrators at times – he clearly had a blast and really liked the people he met along the way – but he manages to tell the story and make his points in a fast paced and entertaining way.

I first read Born to Run at a time when I 4 or 5 times a week and devouring every book on running I could find.  I was totally gripped and totally unquestioningly accepted McDougall’s hypothesis.  Reading it again now at a much more sedentary phase of my life  (I really need to get back running!), I found myself much more skeptical of the barefoot running theory and the pop-evolutionary anthropology.  However I still really enjoyed the book and McDougall’s writing style.

Born to Run has gone down as a classic sports book and it definitely deserves its place on your book shelf.  Highly recommend for anyone who has ever wondered just how far they could run.