I’ve written before of my fondness for Jeff Pearlman’s books and recently reviewed his new excellent USFL book.  But unknowingly, I’ve only read his books that cover a group of people – a team or a league but not read any of his biographies.  So I picked up Gunslinger hoping it lived up to the other Pearlman books I’ve read and loved despite having a narrower focus.

Not living in the US, my engagement with NFL varies year on year  – in college, and my heavy gambling phases after college, I watched loads but some years I’d see very little.  The three years I watched the most NFL coincided with Favre’s amazing last year at Green Bay, his temporary time at the Jets and his incredible first year at the Vikings.  So I’m much more familiar with the end days of Favre rather than his origin story and Superbowl success.

Favre’s story is the classic sports narrative of the overlooked kid nearly didn’t make it but the right coach/scout believed in him and took a chance.  After spending his high school career handing off to a star running back, Favre very nearly didn’t get a Division 1 college scholarship.   After a pretty successful collegiate career  – where the relatively tame high-schooler turned into a party animal – Favre was overlooked in the first round of the NFL draft.

After an uneventful year on the bench of the Falcons, he was traded to Green Bay where he very soon became a legend.  Setting all sorts of NFL career records, and leading the Packers to two Superbowls (winning one), Favre was adored by Packers fans and seemed to have a home their for life. Despite hard drinking, womanising and stays in rehab, he never missed a game and had many more successful seasons than bad ones.

After seeming to be on the downhill slide, Favre’s form improved remarkably and he cam agonisingly close to getting back to Superbowl.   While flirting with retirement, he forced his way out of the Packers and, after a poor year in NYC, did the one thing guaranteed to piss off his former fans and sign for Green Bays greatest rivals.

Pearlman, as is his trademark, interviewed an astonishing amount of people for the book.  The level of detail in his research is reflected in the incredibly comprehensive nature of the book.

Favre comes across as a man who is both likable and dislikable in almost equal measure.  For long parts of his career he put his own addictions, desires and career well ahead of his family life.  However, his wife ultimately stayed with him and he seems to have somewhat mended his ways in later years.  The intro to the book sums up Favre very well  by highlighting conflicting stories that show both the good and the bad.   It feels like an objective account of a complicated man who will long be remembered as one of the great NFL quarterbacks.

Overall, Gunslinger is a really enjoyable read.  Pearlman’s ability to take a huge volume of information and condense it into a fast paced and gripping narrative is on full display.  It’s an interesting, fun and really good book that I’d recommend for anyone with even a passing interest in NFL. 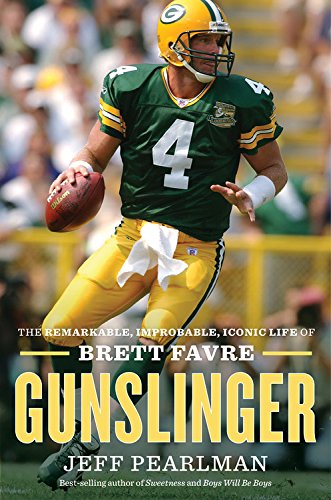 (I’m writing this review as I have NFL Redzone on in the background and Drew Breese has just passed Favre’s NFL record for most completed throws in a career – an interesting bit of symmetry).