Born to Run was a huge hit when it was published in 2009.  Part manifesto, part love letter to running, the book is built around a secret race that the author took part in alongside the reclusive Tarahumara Native Mexican tribe and the legendary ultra-marathoner Scott Jurek.

McDougall becomes enthralled by stories of the Tarahumara who can run amazing distances without shoes and without injury.   McDougall intersperses the story of him tracking down and the secret race being organised with his own musings on how running has moved away from its original origins.

The book has gained most of its attention for its exploration of barefoot running and the (surprising) impact running shoes have had on injury rates.  Spoiler alert: as technology improves, injuries have gone up, not down.

McDougall also explores the hypothesis that gives the book its title – that humans have evolved as a running animal.  The theory goes that humans developed the ability to run long distances in order to literally run down prey.

The book is exceptionally readable and packed with a cast of fascinating entertaining characters.  McDougall’s passion and enthusiasm shines through.  He may not be the most neutral of narrators at times – he clearly had a blast and really liked the people he met along the way – but he manages to tell the story and make his points in a fast paced and entertaining way.

I first read Born to Run at a time when I 4 or 5 times a week and devouring every book on running I could find.  I was totally gripped and totally unquestioningly accepted McDougall’s hypothesis.  Reading it again now at a much more sedentary phase of my life  (I really need to get back running!), I found myself much more skeptical of the barefoot running theory and the pop-evolutionary anthropology.  However I still really enjoyed the book and McDougall’s writing style.

Born to Run has gone down as a classic sports book and it definitely deserves its place on your book shelf.  Highly recommend for anyone who has ever wondered just how far they could run.

Two Hours is a comprehensive look at the world of men’s elite marathon running framed around the question of whether any man can run 26 miles and 365 yards in under two hours.

Two Hours is first and foremost a celebration of elite men’s marathon running.  While I expected the book to focus more heavily on the quest for lower and lower times, its actually much broader than that, and probably a better book for this broadness.  It combines the history of the marathon, a comprehensive look at the marathons raced between 2010 and 2013 and an in-depth focus on the career of 4 time major marathon winner Geoffery Mutai.  While it touches on all of the key things being considered in efforts to run a 2 hour marathon – shoe technology, genetics, doping etc – it doesn’t cover these in massive detail. 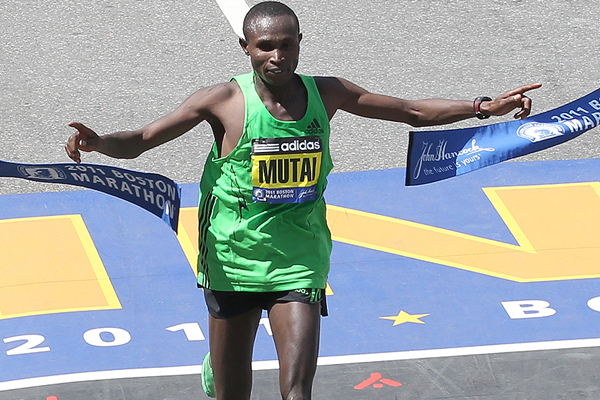 The years covered by Caesar ended up being really fascinating for marathon running – with the emergence of new superstars, world records and doping scandals – and the book benefits from the amazing access Caesar had to the athletes.  It’s pleasing that doping is addressed and Caesar’s insights into how doping appears to operate (at least for some athletes) in Kenya are interesting.  The insights gleaned from in-depth interviews with Mutai about his state of mind during races was also enlightening.  There are also interesting doubts cast on the ‘barefoot running’ craze popularised by the excellent Born to Run – Caesar observes that elites marathoners have been asking for more cushioning not less.

The one thing that I think was missing from the book was consideration of women’s marathon records – I think the fact that Paula Radcliffe held the women’s world record for so long (and still held it at the time of writing the book) would have been an interesting topic to consider when looking at both the progression of the men’s record during this time and the dominance of East African’s.

The book was finished before the launch of the academic led Sub2hrs project and was published before the launch of Nike’s Breaking2 Project which in 2017 saw Eliud Kipchoge run the distance in 2 hours and 25 seconds.  Caesar had speculated about the possibility of just such an attempt – but there is almost no mention of Nike in the book which talks much more about Adidas (as people from Adidas must have been willing to speak to Caesar). It is particularly interesting that the men’s world record, that must be set during an actual marathon meeting certain conditions, has not improved in the last 4 years – suggesting that a plateau has been reached for now?

Overall its a very enjoyable and easy read.  Caesar writes very well and is clearly passionate about the subject and fascinated by the athletes he meets. Highly recommended for anyone with an interest in distance running.