When a writer decides to select an ongoing event or situation to cover for a non-fiction book, there’s always the unknown question of what happens if the situation changes radically?  The coach gets fired, the team turns out to be crap, the player gets a drugs ban etc. etc.

Howard decided to write The Gaffers in 2001 looking at how the awkward double act of Mick McCarthy’s management and Roy Keane’s captaincy had driven Ireland to the 2002 World Cup in Japan & Korea.   Little could Howard have known that the dynamic of their relationship would become the biggest story in world sport as Keane ultimately ended up leaving the squad in the incident that will forever be known simply as ‘Saipan’.  Howard ultimately ended up writing about a relationship that was dissected over in immense detail – I’ve no idea whether it was good or bad for sales but it certainly made it a different book than would have been intended. 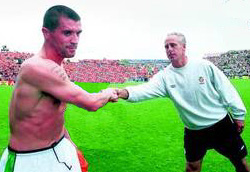 The Gaffers has sat in my ever expanding to-read pile for about 10 years.  McCarthy’s re-appointment as Ireland manager (as Keane departs as assistant manager) has led me back to books from that era of Irish football.

Howard paints a picture of both McCarthy and Keane through the eyes of the other members of the Ireland squad.  McCarthy was the former captain who showed great loyalty to players and knew how to handle nervous young stars.  Keane was the champion who refused to settle for second best and resented time away from home if it wasn’t being put to maximum use.

Howard’s thesis is that the combination of a supportive manager and a driven demanding captain inspired a team of mixed talents to outperform their individual abilities.  In hindsight, it seems obvious that the relationship could only continue for so long, but all logic suggested they would make through a few more weeks till the end of the World Cup.

The book takes us through the background to their relationship and the qualification campaign that saw the memorable 1-0 win vs. Holland in Landowne Road. By necessity, the later stages of the book become a retelling of the Saipan story and an overview of Ireland’s World Cup games.  Unfortunately the great ‘what-if’ remains whether the Keane/McCarthy dynamic could have driven Ireland further in what remains the weakest World Cup in years.

The book was an enjoyable nostalgia trip and a good insight into the dynamics behind the Irish team in the later stages of McCarthy’s first spell in charge (it also brought back much more painful memories of Ian Harte’s spell as a starting international centre-back). It’s a short and well written book that any Irish football fan would enjoy.

As McCarthy takes the reins again, it will be fascinating to see whether he can recreate the team spirit and dynamism in a team that no longer has the world class talents of Robbie Keane, Damian Duff, and the one and only Roy Keane. 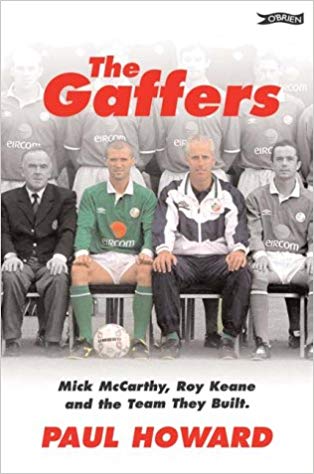