“Is it wrong? By the law of the written word, yes. But questioning the morality of conducting deals in a certain way involving third parties or agents is a completely outmoded and backward way of thinking.”

Jon Smith is a self-described ‘Super Agent’ – a key figure in, and beneficiary of, the commercialisation of English, and global, football.  The Deal is part biography of Smith, part history of football’s commercialisation and part defence of the role of football agents.  It’s doubtful though whether it lives up to its sales pitch of being a “scintillating exposé” of how the football industry really functions. 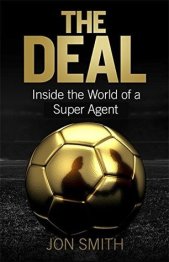 The first few chapters operate almost as stand alone stories that could work better as magazine articles – an ill-fated trip to the Ukraine in an attempt to sell Sheffield Wednesday, a look behind-the-scenes on deadline day, a discussion of how agents generally operate and a justification of football agents and their “morality”.  These chapters contain interesting insights into how the business of football works, which is the real appeal of the book (and the reason I picked it up).  However, I get a very strong sense that the book only scratches the surface of what really goes on inside football.

These early chapters also include detailed, and repetitive attempts to justify the need for, and role of, agents.  Some of Smith’s views – particularly around structuring things in a tax efficient manner until Revenue shut them down or the need to make payoffs to players family and friends because it’s the “culture” – leave a bad taste in the mouth.  Obviously it would be totally naive to not expect this stuff to go on and it is admirable that Smith at least addresses the issue.  Lets just say I found his defence of plenty of the activities wholly unconvincing.

Like most businessmen, Smith is generally opposed to any piece of regulation he talks about, yet bemoans the fact that FIFA decided to step away and leave the industry largely unregulated (because it increased the competition presumably) – there is a definite sense of having his cake/5% and eating it too.

The rest of the book is mainly a biography of a very successful career in business – made glamorous by the connection to sport and entertainment.  Smith’s own life story is engaging – he struggled with his speech as a child and suffered personal tragedy while still in his 20s.  The stories of how he made his name with the England team and creative marketing are fascinating as are his ventures into other sports.  However, having come for an exposé on the business of sport, I was ultimately left a bit bored and unengaged in the rise and potential fall of a mutlimillionaire with a prizate zoo and homes around the world.

The best parts of the book contain  interesting insights into the business side of the game. As well as the first few chapters, these insights are sprinkled across the book. Smith discusses some well-known personalities and includes a lot of anecdotes about individual players and transfers.

Ultimately, the books biggest flaw is that it’s too much about the Super-Agent himself and not enough about the game.  Pretty quickly, Smith’s ego begins to grate – and its gets annoying reading about how successful and great Smith is.  There is a way of recounting how well you have done without quite saying it so baldly.  It’s understandable that any such book will exalt the author’s successes but often it feels like the line between telling and boasting is crossed.  Then again, if I had been Maradona’s agent and achieved nothing else in life I’d probably have no shortage of ego!

Overall The Deal suffers from trying to be too much in one.  It does contain an interesting behind the scenes look at the business side of professional football.  Smith has had a very interesting career and football fans will find much of the book enjoyable.   It has its flaws, but is a decent, if overlong, read.