‘Chaos is a Friend of Mine’ is a Bob Dylan quote from a famous interview with Nora Ephron that he gave in 1965.  Dylan’s view was that chaos existed and all we could do was accept and acknowledge its presence.  Conor McGregor probably hasn’t thought quite as deeply about chaos but he certainty has caused it – good, bad and otherwise.

Chaos is a Friend of Mine is a really interesting book that examines the phenomenon of Conor McGregor.  Irish journalist Ewan MacKenna considers how McGregor has used, helped to shape and in turn been shaped by modern society from the populist rise of racism/Islamaphobia to the growing obsession with fame and celebrity.

MacKenna is a journalist with many fans and possibly just as many  critics.  Totally unafraid to call bullshit, he has wound up pretty much every die hard sports fandom on the internet by calling it as he sees it.  He seems particularly disliked for his attempts to shine a focus on the dark side of Man City’s wealthy owners.  I must admit, I’m a huge fan of MacKenna and share much of his scepticism about modern sport. I’m much less of a fan of UFC and MMA. While I appreciate the talent, work ethic and bravery of the fighters, the brutality of seeing someone get hit repeatedly in the face as they lay on the floor of the octagon just too much for me to enjoy.

Many of McGregors inner circle refused to speak to the author, a clear sign of McGregor’s need to control his own narrative. Instead MacKenna takes a much broader view than a paint by numbers biography.  Ultimately he tells how a charming young man of immense confidence and no little talent achieved beyond his wildest dreams but seems to have found it difficult to separate who he was from the boarish, racist public character he began to portray.

Chaos is a Friend of Mine is a really interesting read by a very talented writer.  MacKenna’s dislike of the cultish followers of McGregor is well known to anyone who follows him on twitter.  Beware the 1 star reviews of trolls and fan boys that are already apparent on amazon and goodreads.  The book is as objective as it is possible to be unless you believe someone can, or should, be neutral on racism and Islamophobia as legitimate tactics to sell tickets. 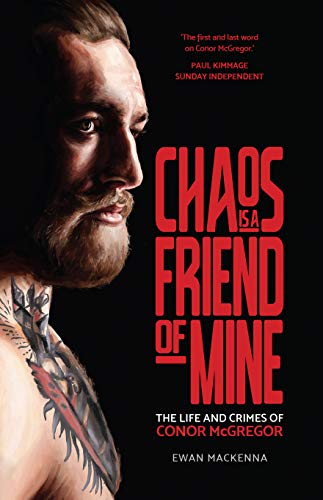