The happiest I’ve ever been in one single moment, apart from when I first held my daughter, was when Ireland scored a 4th goal in Tallinn to all but guarantee a place in Euro 2012.   I knew I was going to be able to watch Ireland play in a major international tournament – my footballing dream since I had watched every minute possible of USA’94 as a 10 year old.

For Dave Roberts, his dream was to see his beloved Bromley FC play at Wembley, the English national football stadium.  The Long, Long Road to Wembley is Roberts account of his love affair with his local non-league football team.  From the age of 13, he fantasised about his local team making it to a cup final and living up to the previous legendary Bromley teams that had won the FA Amateur Cup.

The book focuses on two phases in Roberts and the club’s lives.  Firstly, Roberts recounts with brilliant humour the period when he was 13 to 20ish and attending every game.  When Bromley was the centre of his universe as he tried to figure out who he was.  He recounts the characters, fashion trends and most of all the defeats as Bromley crashed out of the cup every year.  It captures the essence both of being a fan and of growing up.  It also wonderfully captures the sense of community that football can bring when its not being played in 80,000 seater stadiums where tickets cost £80.

Inevitably, real life eventually gets in the way and Roberts goes more than 30 years without seeing Bromley play.   He remains a fan, getting sent the local paper by his Mum so he could stay in touch with results.   The second half of the book focuses on his return to watching Bromley live after returning to the UK and the eventual Cup run that Roberts had fantasised about for more than 40 years.  Roberts gets sucked right back into his devoted fandom, and obsessive collecting of programmes and club mugs.

The book is brilliantly funny throughout.  Roberts has a wonderful way with words and a self-depreciating yet still joyful take on life.  The Long, Long Road to Wembley is a joy to read and a beautiful take on the meaning of football, fandom and friendship. 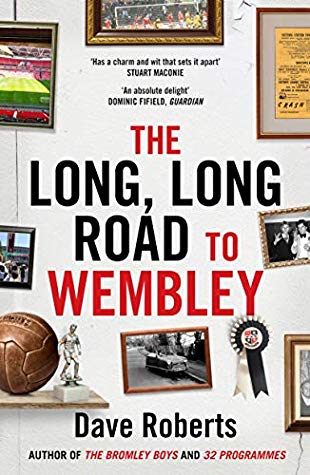