Having spent a huge amount of time in Philadelphia in the last decade, I gradually, and without realising, became a fan of all of the Philly sports teams. Yet of all the local teams, the hardest to love has always been the Sixers. It’s one thing watching a team that is terrible, but a very different one watching one that is deliberately terrible.

I did however become fascinated with ‘The Process’ – the name given to the multiyear project to rejuvenate the Sixers and make them relevant again.  Tanking to the Top is the story of ‘The Process’ as new owners and a unique General Manager looked to rekindle the 76ers after years of mediocrity.

Tanking is a well known strategy in US sports where teams prefer to be terrible than just mediocre in order to secure a better draft pick the following year.  In basketball, one or two players can make such a difference, and the top 2 or 3 players in the draft can be so much better than the rest, that a weighted lottery system applies to first few draft picks to discourage tanking.

The Sixers, and GM Sam Hinkie, persuaded a strategy of accumulating draft picks, through losing games and trading their best players, with more commitment than maybe any team previously.  The team was so terrible for so long that the owners ultimately lost faith and Hinkie left before he saw the fruits of his labour.

Weitzman recounts the various trades, drafts and moves which the Sixers made to try and build a team that could potentially compete for a championship.  Hinkie would draft injured players who fell down the draft, happy that they would miss a full season so the team would continue to lose.   Along the way, there were plenty of missteps, including drafting a player at number 1 who very soon forgot how to shoot a basketball.

Hinkie is undoubtedly the centrepiece of the book.  A very smart guy, who on paper probably has the worst win-loss record of any GM in history, Hinkie remains totally uninterested in defending his own reputation.  This indifference to his own coverage, and utter commitment to ‘The Process’, helped to generate remarkable loyalty in a cohort of fans, and even some players, who became Hinkie devotees.

While The Process has so far only led to a couple of playoff series wins, and that incredible Game 7 against the Raptors last year, the book’s consensus is ultimately that The Process has been a success.  It remains to be seen whether the current team can ultimately go a step or two further in the current superteam era when the NBA eventually returns.

The book is engaging and entertaining throughout with Weitzman giving great insight into the careers, lives, and thoughts of all of the key players in the story.   A book that would be enjoyed by any NBA fan. 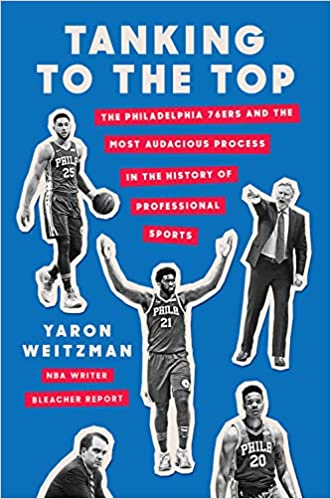