Not all of these books are specifically about Ali, but he is a central figure in all of them.  For those who just want a list:

My cousin boxed for Ireland as a youngster and just missed out on the Atlanta Olympics.  My uncle, is father, was my intro to boxing and to boxing books.  I was first exposed to Muhammad Ali as a young kid watching some old tapes in my uncles house.  I remember thinking that how can he be the greatest when he lost so many times.  Surely “undefeated champion” beats “multiple times champion” every day of the week.  I remember watching Ali light the Olympic flame in Atlanta as a 12 year old and wondering why this guy was the hero, why was he loved so much by so many.  Then I read King of the World: Muhammad Ali and the Rise of an American Hero (1998) by David Remnick.

Its been over 15 years since I read this book, not long after it was first published. As anyone who has read any Remnick will know, its written with the style and with the imagination that has characterised all of his work. It is a wonderful book.

It was one of the first books I read that put any sportsman in the cultural context in which they operated.  The majority of the book deals with the time-frame between Ali’s (then Cassius Clay) first heavyweight title fight against Sonny Liston, and the rematch between Liston & Ali.

I remember the vivid descriptions of Floyd Patterson – an incredibly sympathetic figure for a world heavyweight champion.  Sonny Liston too looms large in the book.  Most of all what struck me was that Remnick showed that great sportsmen are a lot more like you and me than we often think.   Remnick captured some of Ali’s lightening in a bottle and the reasons he became such a dominant cultural figure.   It showed me why, and how, a black man who converted to Islam and refused to fight became a cultural hero in a US where racism, love of military and fear of Islam have always been, and remain, at the very heart of the nation’s psyche. On a personal level, he showed me that sports books can tell you as much about a time and a place as any of the greatest literature.  A re-read is long overdue (along with a more detailed review).

Since then, Ali has loomed large in other boxing books I’ve read and loved – as the young brash Olympian in Rome 1960: The Olympics That Changed the World (2008) by David Maraniss.  It captures the attractiveness of young Cassisus Clay and hints at the man he would become.  In Night Train (2000), Nick Tosches dark and wonderful book about Sonny Liston, life and the American Dream, Ali serves a counterpoint to the often overlooked and unloved Liston.  In Dave Hannigan’s excellent Drama in the Bahama’s (2016) he is the pitiful exploited figure unable and unwilling to listen to reason and call time on his wonderful career.

Hannigan previous book, The Big Fight (2002) chronicles a week that Muhammad Ali spent in Dublin and his fight with fight Al “Blue” Lewis in Croke Park in July 1972.  Hannigan tells the story of Ali in Ireland through the experiences of those who saw, met and interacted with him in Dublin.  At the time, Ali was on the comeback trail following his first fight, and loss, to Joe Frazier.  Given his long lay off while he refused to be drafted into the U.S. Army, it was unclear whether Ali would ever be the same fighter he once was.  He was still just 30 years of age however and it would turn out that his biggest days remained ahead of him.  He was, and would remain for a long time, the single biggest and best known figure in world sport.

The Big Fight captures the magic and charisma of Ali while also capturing some of the magic and uniqueness of Ireland. It is hard to imagine any figure capturing quite the same attention and affection that Ali did – perhaps only the reception achieved by another famous African-American with distant Irish heritage, Barack Obama, compares.

Shortly after Ali’s death, I saw repeated reference’s to Thomas Hauser’s iconic Muhammad Ali: His Life and Times (1991) as the definitive book on Ali.  Regularly cited as the greatest book about the Greatest, I read it almost immediately.  It deserves every word of praise it receives. 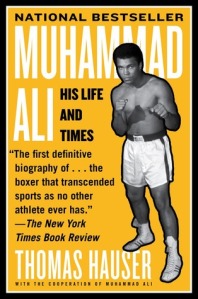 Hauser’s genius is to present the reader with a unique compilation of different peoples’ accounts of Ali throughout his career and life.   The book presents Ali as who he was to those who experienced him – as well as adding many of Ali’s own words.  Hauser knows when to step away and let the protagonists tell their own tale.  He presents the good, the bad, and the ugly.  His wonderful skill, his bravery, his commitment, his beauty, his pacifism and his words.  And also his mistreatment of women, his misguided behaviour while in the Nation of Islam and his need to keep fighting when it was clearly the wrong thing to do. By the end of the book, a hero emerges. His kindness, his grace, his love shines through.

More recently, I read Ali: A Life (2017) by Joathan Eig.  Its an extremely enjoyable and detailed book that deserves to be mentioned alongside the work of Remnick and Hauser but doesn’t quite reach their heights. 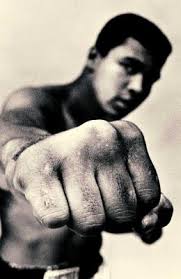 I was a bit sceptical as to the need for a new bio of one of the worlds most written about men. The wonderful cover of the book made me curious however and I wasn’t disappointed. Eig had superb access to the remaining members of the Ali entourage as well as access to huge volumes of new material, including FBI materials and analysis of the punches taken by Ali.  This new insight makes the book a welcome addition to the chronicles of Ali.

The book is an honest account of Ali, his contradictions and his genius. It captures what he meant to his time and place and why his legacy is so enduring.  It is a thoroughly enjoyable read and given its scope – being the first major biography published after Ali’s death, I highly recommend it as a one stop source in Ali’s incredible life. It is a book best read while pausing at the retelling each fight to watch the action on YouTube then savouring the description on the page.

Ali’s story is also the story of his time and place.  He held up a mirror to the America he found – and dragged many people with him towards developing a more tolerant more loving worldview.  For a man who punched people for a living and once preached radical racial separation, its quite the achievement.